Remember back in the Spring of 2009 when two young boys committed suicide within a week of each other, both eleven years old? Carl Joseph Walker-Hoover of Massachusetts and Jaheem Herrera of Georgia were both being subjected to unbearable anti-gay bullying at school. Whether or not these boys were actually gay, using homophobia to police masculinity is practically the oldest trick in the book. In the aftermath of these suicides, and in the discussions that ensued on the Web and in print, there was extensive lip service given to gender and the inevitable complaint that boys have it so hard, that feminism has stripped men of their manliness, that men don’t know how to be men anymore, that we’ve got a Crisis In Masculinity.

That might seem like anti-feminist rhetoric, but I agree with it—at least in part. I agree that masculinity is changing, for some in dramatic, drastic ways. I have witnessed and observed cultural changes around the masculine and male gender roles which are shifting, yes, as a direct result of the recent feminist and other gendered social change movements.

Read the piece in its entirety over at Carnal Nation.

My piece “A Love Letter to Femmes” has been featured in Visible: A Femmethology Volume II. Download the mp3 of me reading this piece, recorded by Audacia Ray (thanks!). 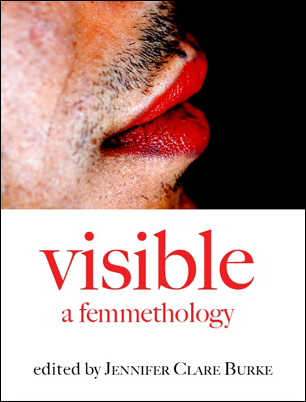 Pick up Visible: A Femmethology Volumes I and II at your local independent queer feminist radical bookstore, if you want them to be around next year, or, if you must, on Amazon.